Bishop Cornelius Sim, 69, became the first Catholic bishop from the small state of Brunei to be named a Cardinal by Pope Francis. It is not only an honour for the young Church but also for the state of Brunei. He is among the 13 new cardinals named on Sunday in Rome.

“By deciding to name Bishop Cornelius Sim, the Holy Father, Pope Francis, is expressing his solidarity with the Church in the peripheries,” said Msgr Marco Sprizzi, the charge d’affaires at the Vatican embassy in Kuala Lumpur. This echoes one of the Pope’s famous quotes, “I see the church as a field hospital,” to be close to the poor and suffering, to heal wounds and to warm the hearts.

Bishop Sim, was born in Seria, Brunei, and is of Chinese and Dusun descent. By profession, he is an engineering graduate from Scotland, and worked in Brunei for several years before starting his priestly studies. He was ordained to the Catholic priesthood in 1989, and appointed as apostolic vicar of Brunei by the late Pope John Paul II in 2004. The state of Brunei has about 21,000 Catholics.

“Aiyo, I don’t know why I am chosen. It’s a real surprise”, these were the first words of Bishop Sim, when contacted by phone on Sunday night, just minutes after it was announced in Rome. He took it in his stride saying “I accept this new responsibility for the good of the Church and the peoples in the region.” The college of Cardinals of which Bishop Sim will be a member, not only votes on who becomes the next Pope, but are also seen as the closest collaborators of the Pope. The college with its current 128 members from all continents, makes real and visible the universal face of the Church.

Meanwhile, the head of the local Catholic Bishops Conference for Malaysia-SingaporeBrunei (CBCMSB), Bishop Sebastian Francis of Penang, offered his felicitations and fraternal accolades from all the bishops and churches in the region. “This is truly an auspicious moment for us. It is a moment of rejoicing for all the little Churches in the region. Even the small and little has great significance.” The gesture of Pope Francis is seen as affirming the vision for the Church to be present to all the peripheries of the world and to be a ferment of dialogue and hope. The first Malaysian cardinal was also named by Pope Francis in 2016, Cardinal Soter Fernandez of Kuala Lumpur.

Pope Francis is also a great promoter of human fraternity and ecology. In February 2019, the Pope and the Grand Imam of Al-Azhar, Ahmed el-Tayeb, signed a Document on Human Fraternity for World Peace and Living Together, during a Global Conference on the topic in Abu Dhabi. The call to fraternity and social friendships has been further emphasized with the release of the new encyclical or letter of Pope Francis on 03 October 2020, Fratelli Tutti. It calls for a “culture of encounter” and action towards “inclusive and constructive dialogue among all cultural components of society,” calling upon all people of good will to build more human fraternity and solidarity, and a plea to reject wars.

My journey of faith

Pope’s December prayer intention: For a life of prayer 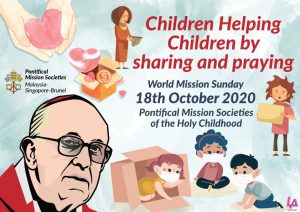