After a visit to Cardinal Soter Fernandez at the St Francis Xavier’s Home for the Elderly run by the Little Sisters of the Poor earlier this year, we chatted outside the front door while waiting for my taxi to arrive.

When the car rolled into the porch, the cardinal walked up to the driver’s side of the car and engaged in some light banter as one would to an old friend.

Inside the car, on my way back, I asked the taxi driver if he knew who that gentleman who had greeted him was. He shook his head. “Itu paderi besar gereja. Macam ketua gereja di Malaysia,” I explained.

The driver looked gobsmacked that such a person would want to engage with him, a taxi driver and a non-Christian at that, in conversation.

That was Soter. Much has been said about his legendary humility and his ability to reach out to many, but we would be missing a lot if we stopped there.

Soter lived the joy of the Gospel. It was not just a joy derived from personal salvation. For him, the Good News was a much, much broader message for the whole of humanity.

One of the concerns he raised was whether we had become a Church for the middle to upper classes. “Look at who we are catering for, the programmes we are organising – who are they for?” he said. “We must try and reach out” to those who are suffering in society, to those on the margins.

Five years ago, at the College General seminary in Penang, the then archbishop emeritus took out from his bag a clutch of documents relating to the Aggiornamento (renewal of the Malaysian Church) in 1976 and the Bishop of Rome’s apostolic exhortation on the Joy of the Gospel.

Soter was bubbling with enthusiasm about this Joy of the Gospel. And you can see why.

Francis’ exhortation was a resounding affirmation of Soter’s own lifelong work and worldview. As if that was not vindication enough, the following year, Francis elevated Soter as Malaysia’s first cardinal – for Soter had “got it” in his grasp of the “joy of the Gospel” in all its depth and breath.

The fourth chapter especially must have touched a chord with Soter as it dealt with the “social dimension of evangelisation”.

Here Francis wrote about the concerns of the vulnerable — “the homeless, the addicted, refugees, indigenous peoples, the elderly who are increasingly isolated and abandoned, and many others,” particularly migrants.

Francis did not stop there. He said the structural causes of poverty must be resolved. “We can no longer trust in the unseen forces and the invisible hand of the market,” he wrote. Growth in justice also requires a “better distribution of income, the creation of sources of employment and an integral promotion of the poor which goes beyond a simple welfare mentality”.

The Bishop of Rome highlighted the special place of the poor in society and the importance of ecumenical and inter-religious dialogue.

That was something Soter had taken to heart a long time ago. Among his closest friends were the Philip family in Cheras. Though they were from a different Christian denomination, Soter felt completely at home during his visits there. “He was full of care and concern for us,” recalls a family member, “and we would often share reflections from the scriptures”.

Soter’s concern about the direction of the  Malaysian Church was diplomatic but it spilled over in the choice of passages he highlighted in the Joy of the Gospel.

Francis had noted that the missionary impulse today means we must channel the Church’s energies and ways of doing things into the “evangelisation of today’s world rather than for her (the Church’s) self-preservation”. We must make ordinary pastoral activity more inclusive and open so that pastoral works can reach out to all those Jesus wants to be friends with. That means we should not fall prey to “ecclesial introversion”.

Soter noted that Francis wanted us to abandon the complacent attitude of pastoral ministry that says, “We have always done it this way.”

Francis was dead serious about the need for radical change, even at the highest level of the Church, “Since I am called to put into practice what I ask of others, I too must think about a conversion of the papacy” and “the central structures of the universal Church”. (para 32).

Similarly, Soter was the living embodiment in the Malaysian Church of this spirit of reform under the Second Vatican Council and its Aggiornamento impetus (which means a modernisation, bringing the church up to date and looking forward to the future and engaging with dialogue with the outside world).

So he was concerned about the forces of ressourcement (an emphasis on a return to earlier sources, traditions and symbols of the early Church) and the excessive focus on rituals that would hold the Church back from this vision of the Second Vatican Council.

Soter’s own commitment to the cause of justice and peace was central to his ministry as reflected in his choice of motto as bishop: Keadilan dan Keamanan.

This calling was tested by fire in 1987, when over a hundred activists and critics were detained without trial under the harsh Internal Security Act during a crackdown codenamed Operation Lalang. Among them was the La Salle Brother Anthony Rogers, head of the National Office for Human Development, inspired by Soter.

At one meeting with a top cop during those testy, fear-laden days, the officer banged his fist on the table, presumably to intimidate the then-archbishop.

But Soter showed his humility was not borne out of weakness. “Behave yourself!” he admonished the officer, urging him to be more civil. The meeting then proceeded, more amicably.

Led by him, the bishops of Malaysia raised eyebrows when they courageously denounced the ISA as “immoral”.

Soter recognised the importance of the local Church being rooted in local cultures and promoted the use of Malay in church services and elsewhere – ultimately leading to the controversy over the use of the word Allah in the Herald, which hit global news headlines.

The HERALD itself was born out of Soter’s inspiration when, in 1993, he invited Lawrence Andrew, SJ, the current long-serving editor, to start a newspaper. Fr Lawrence then had no experience in running a paper, but his Jesuit training had prepared him for the challenge of being thrown into the deep end – which he took up with relish. The rest is history.

Soter has left a monumental legacy – a vacuum that will be hard to fill. It is also a measure of his extraordinary pastoral touch that has left so many – inside and outside the Church – feel they have lost a close family member. Farewell, dear Cardinal! 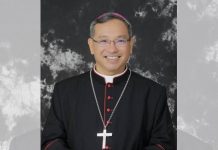 My journey of faith

Pope’s December prayer intention: For a life of prayer